When you’re using cloud storage services like Box.net, Dropbox, OneDrive or Google Drive you should always make sure your files are encrypted. Everything that you haven’t voluntary posted online should be encrypted. Unfortunately when I say you should always encrypt your files, there’s at least someone claiming “I don’t have anything to hide”. Perhaps, but do you still want anyone to be able to view your personal budget, your vacation plans, your love letters or anything else personal you might have? I don’t think so.

There are also stories online about people that got their Microsoft account frozen because they had a handful of pictures with “partial nudity” in their OneDrive account. This shows that even if the online storage providers claim they respect your privacy, they can and sometimes will check out your content. This is why you have to encrypt all your files.

There are a couple of services that does this type of encryption with ease for you so you don’t have to worry about anything like this. In this review I’m focusing on three services for encryption: Box Cryptor, Cloud Fogger and  nCrypted Cloud.

Box Cryptor and nCrypted Cloud both have a service where you get a  drive letter (like a hard drive in Windows) where all files you drag or create on that drive are encrypted directly without you having to do anything special. The files are then backuped to the cloud.

Which leads to next thing in the review: where are the companies located? nCrypted Cloud is located in USA (Boston), while the other two companies are more trustworthy since they are both based within the European Union (Germany to be more exact). With all the NSA/CIA spying in the news these days I wouldn’t trust a USA company with my encryption…..

All three encryption services support pretty much the same cloud storage services so unless you’re using something really special you shouldn’t have to worry about this. All services also use the same type of encryption, which is the industry standard AES 256bit, so your files are encrypted with the same level of encryption using all services. 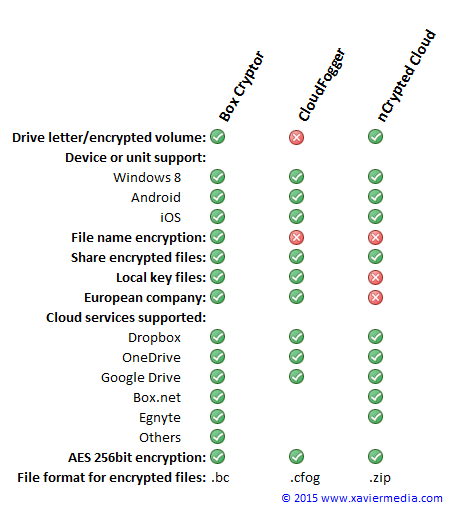