Yesterday it was time for the yearly Dusting Expo, the biggest expo for home IT in Sweden.

Asus had for example a really nice hybrid which got Windows 8.1 installed and a full version of Home or Student Office 365. With its 64 Gb of disk space (and the possibility to expand using microSD cards) you have plenty of space for just taking notes.

Dell had a short presentation on their Alienware models and I really liked the 18″ laptop with double graphic cards. Both desktop and laptop models look very nice in their design. It’s really an alien feeling with the blue, green or red gloving light. 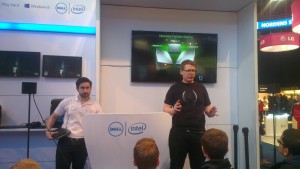 And Adobe presented their Adobe After Effects which is their video editing software you can “rent” in the cloud (their Creative Cloud) for a monthly subscription. At first I didn’t like the idea, but since their softwares costs alot it could be a good idea to subscribe during the periods when you need to use their softwares. I’ve never learned their products, but perhaps it’s time now 😉

On the software side a lot of focus was on Windows 8.1 and Office 365. I have to say that Microsoft really got  a good combination there of desktop software combined with cloud storage/computing which not many others can offer.

Everyone producing monitors had at least one touch monitor present, and some monitors even had Android installed so you could use it as a giant surfpad 😉 when no computer was attached. A 21″ to 28″ monitor isn’t that good to have in your lap when sitting in the couch, but if you have it on the table I guess at least kids would love to play with it 😉

Apple didn’t have anything new this year more than the iPad mini, which we’ve all seen before. No new features and no new models really, just the old boring stuff.